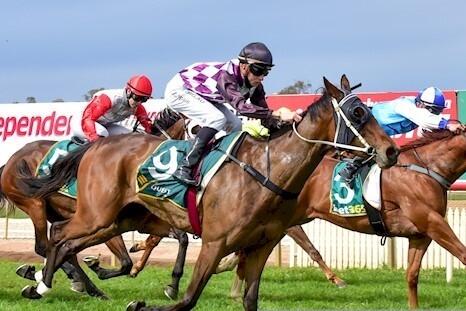 Recent addition to the stable, Dreamwaker had her first run under new ownership at Echuca on Oct 26 and put in a fantastic performance to post a narrow win.

It was the daughter of Bel Esprit's first start in a race since May 2019.

After being slowly away she quickly gathered speed and from her good barrier Zac Spain was able to find a position midfield on the fence.

Soon after passing the 600 Zac asked her to improve and she responded to get a position just behind the leaders, one out rounding the home turn.

Just after straightening a gap appeared and with clear running she quickly ranged up to challenge the two leaders.  After appearing as though she would win the race clearly, the horses on her inside battled on strongly and it looked like the lack of racing for 17 months would count against her.

In the last 50 Zac put the whip away and rode her out hands and heels to the line. She responded really well and showing great courage surged to the post to claim a narrow but impressive victory.

A great training performance by Alicia to have her not only fit enough to run a strong 1200 after such a long layoff but to be able to prevail in such a tight finish against an in form horse deep into his preparation.

Congratulations to the owners who are sure to be dreaming of more success with the mare in the future.