Another February victory for Very Suave 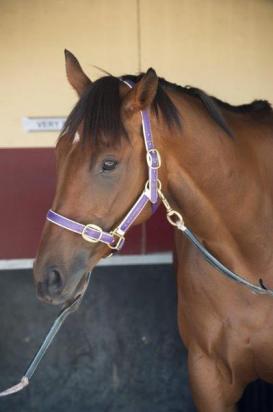 Honest gelding Very Suave showed his best form in the month of February yet again with his win in the Centrebet Rating 68 Handicap (1600m) at Swan Hill.

Very Suave’s Swan Hill success was the six-year-old’s third in the month of February after he won at Kilmore on February 14 in 2010 before injury kept him off the scene for the best part of two years.

The son of Choisir bounced back for a win on February 4 before scoring at Swan Hill almost a year to the day after his last win.

The signs were around suggesting Very Suave would produce another February win at Swan Hill. His form had been rock solid since starting his current campaign, including a luckless fifth at Kilmore at his previous start.

Trainer Alicia Macpherson booked Jarrod Fry to ride Very Suave at Swan Hill. The young jockey capitalised on a smart beginning to have Very Suave positioned right behind the leader before a squeeze at the 1200 metre pushed him back to fifth.

Very Suave travelled perfectly for Fry to have plenty to offer while the front-runners began to struggle at the 600 metres before he began his winning surge at the top of the straight.

The reliable performer hit the lead at the 200 metres before fending off all challengers late in the race to score a determined 1-1/4-length win.

The victory was Very Suave’s fourth from 27 starts while the $9000 first prizemoney took his earnings to more than $58,000.